B2L: A Lot of Frigging Gizmoids In The Back, There

With apologies to Mr. Lafferty, wherever his consciousness resides. 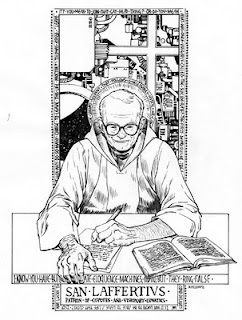 School project: to do an illustration of a literary figure. I chose the great R.A. Lafferty, penner of preposterous parables and other priceless prose, partly because I'm a huge fan, and partly because he's got this great look about him, with a small, square head and what look to be, in every photo I've seen, enormous ape-arms. I am a sucker for ape-arms. Everything I read about the fellow (alas, now passed-on) says he was a devout Catholic. It seemed fitting, then, that he be sainted, and so sainted he be, in monastic dress no less, to further exploit the humour of his monkey arms (monkey! Get it? Monk-y! Yes, yes, that's a pun and an etymological reference at the same time). Yet, I could swear I read some antitheistic sentiment in some of his stories, so compositionally I've used an inverted cross. The assignment, more specifically, was to do an illustration integrating type, so I just have snippets from Past Master thrown around in what might pass as a meaningful fashion.

I did this on a piece of printer paper with a Hunt (Speedball, whatever) 102, my Rotring ArtPen, and my trusty #2 inkin' brush. The paper was not ideal,